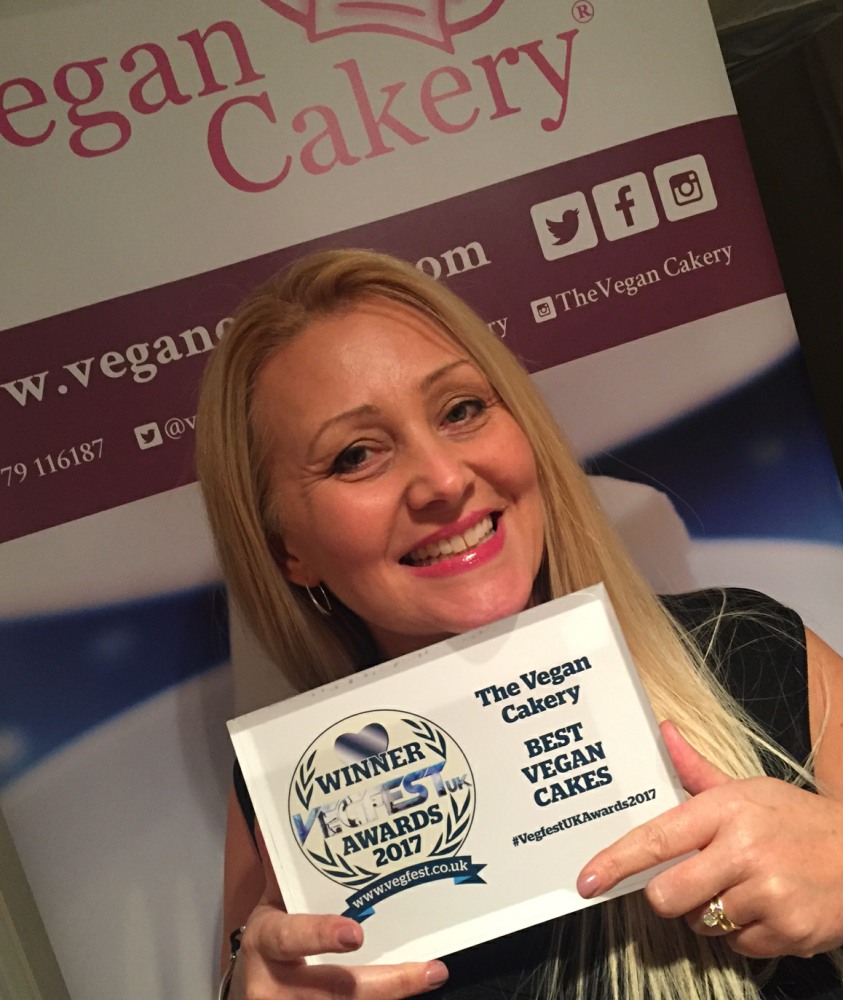 Leicestershire baker Michelle Orme is celebrating yet another outstanding achievement for her business The Vegan Cakery after winning, for an incredible third year in succession, the ‘Best Vegan Cakes’ accolade at the annual Vegfest UK Awards.

Michelle, who operates the multi award-winning cottage industry from her home in rural Fleckney, received the award during a special ceremony at London Olympia on Saturday, 21st October, from actress and model Evanna Lynch – famous for her role as Luna Lovegood in the Harry Potter films.

Voted for by members of the public the length and breadth of the UK, the awards are the biggest and most highly respected in the country for vegan businesses. Understandably, Michelle is elated to scoop her third back-to-back Vegfest UK accolade which is also her sixth national award in total over the past four years.

“I am so, so grateful to everyone who voted for The Vegan Cakery again, it means a huge amount to have won ‘Best Vegan Cakes’ for the third straight year and especially as these awards are voted for by customers and members of the public”, said Michelle at Saturday’s event in Kensington which was hosted by television presenter Wendy Turner-Webster.

“I’ve been astounded with how popular The Vegan Cakery has become, it’s wonderful to know how many people enjoy what I do and how many also support what I do with donations for animal charities in the UK and abroad. That’s the core reason I started The Vegan Cakery in the first place and is the most important aspect of the business for me, so I’m thrilled to win again.”

As impressive as the hat-trick of Vegfest UK accolades are in their own right, even more noteworthy is the fact The Vegan Cakery is very much a one-woman operation. As well as being the sole baker, priding herself on making all products fresh to order personally by hand, Michelle also handles all packaging, marketing, administration and purchasing.

With an incredible range of more than 200 different vegan cakes, pastries and other specialities available through her website www.vegancakery.com some of the best-selling products include cruelty-free versions of Mille-Feuille, Doughnuts, Bakewell Tarts, Battenberg, Banoffee Pies, Lemon Meringue Pies, Key Lime Pies, Tiramisu and, of course a wide range of cakes and cupcakes.

Bespoke products for special celebratory occasions, and festive occasions such as Easter and Christmas, are also baked by hand and The Vegan Cakery is also the only business in the UK with a nationally trademarked version of vegan lemon curd – called Lemon V’urd.

It is the aforementioned support of charities and animal sanctuaries which acts as the real driving force behind The Vegan Cakery, though, with Michelle having donated tens of thousands of pounds to a wide variety of animal causes – including organisations striving to end the exploitation of animals and the use of animals in laboratory testing – since starting the business in June 2012.

“I really feel by starting The Vegan Cakery it gave me a true purpose in life”, added Michelle, “As an ethical vegan, I’m so passionate about animal welfare and trying to raise awareness of the huge, and totally unnecessary, suffering animals go through every day – it’s why I became vegan in the first place. Donating to so many amazing charities is the way I can try and do my bit to help make a difference.”

Underlining the popularity of The Vegan Cakery, the business’ order book is full until early in 2018 but customers in Leicester can still enjoy the 100% vegan products at the delightful Café Mbriki on Carts Lane in the city centre.

Other businesses succeeding in winning awards at this year’s Vegfest UK included the wonderful Mex It Up, named ‘Best Vegan Caterer’, and Viva La Vegan, which won ‘Best Clothing’.