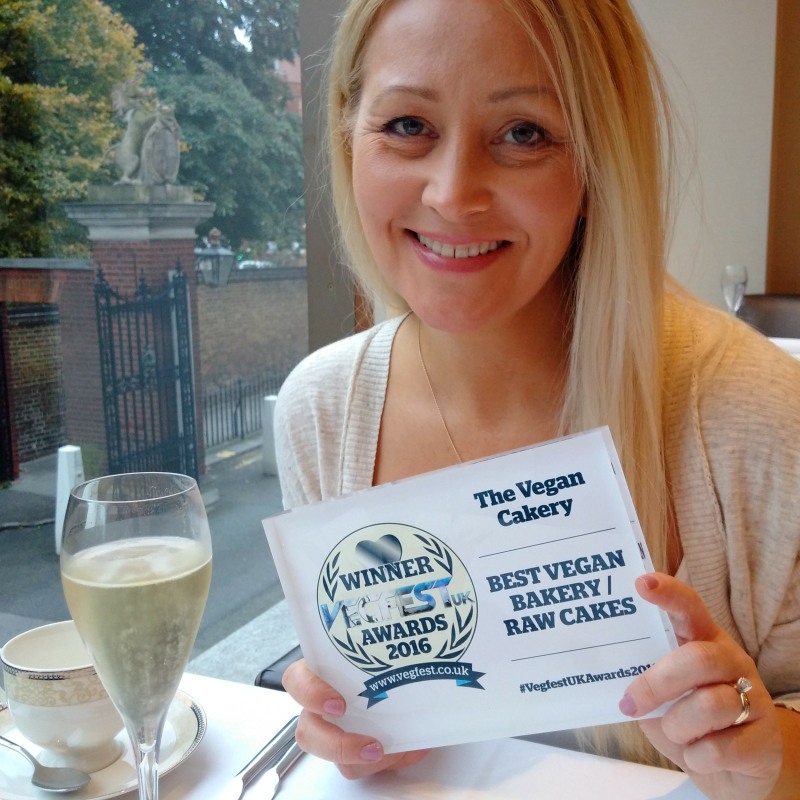 Celebrated vegan baker Michelle Orme received her second national accolade of the year at a ceremony in central London on Saturday, 22nd October, when her business, The Vegan Cakery, was named ‘Best Vegan Bakery’ at the annual Vegfest UK Awards.

Retaining the title for a second consecutive year, Michelle – who runs The Vegan Cakery from her home in the rural Leicestershire village of Fleckney – received the 2016 award from renowned actor, and fellow vegan, Peter Egan during the UK’s biggest vegan lifestyle event at London Olympia.

Marking the second awards success of the year for the not-for-profit 100% vegan business, after winning the ‘Best Vegan Cakes/Desserts’ category at the Vegan Awards UK in July, this weekend’s triumph is the fifth national award in total scooped by The Vegan Cakery since 2013.

Speaking at Saturday’s ceremony, Michelle said: “It’s such a fantastic feeling to win the Best Vegan Bakery award again at Vegfest UK, I’m so grateful to all of the people who voted for me and I can’t express what it means.

“I put my heart and soul into everything I do with The Vegan Cakery, whether it’s the baking, the packaging, marketing or administration, and it’s absolutely amazing to have that acknowledged by so many wonderful customers and supporters from across the UK and beyond.”

Establishing her business in June 2012, since that time The Vegan Cakery has developed an enviable reputation for creating the ultimate in cruelty-free vegan treats which are all personally hand-made to order by Michelle.

The driving force behind the creation of The Vegan Cakery, which is as prevalent as ever today, is Michelle’s passion to raise funds for a wide variety of animal sanctuaries and charities. Supporting charitable organisations working to end the exploitation of animals and animal testing, Michelle also donates thousands of pounds each year to a number of sanctuaries and animal re-homing centres.

“Trying to help animals, and the amazing people, groups and organisations who do such incredible work on the ground, is the reason I wanted to start The Vegan Cakery in the first place and I know a lot of people who support what I do share that passion”, added Michelle, “It’s the most important part of the business for me and is what I focus on to help get me through the 16 to 18 hour days!”

The Vegan Cakery’s products are available online at www.vegancakery.com for postal delivery across the UK with hand delivery options for local Leicestershire deliveries. Additionally, there are a number of stockists across the Midlands and beyond, including Café Mbriki on Carts Lane in Leicester city centre where an ‘Order and Collect’ service is operational.