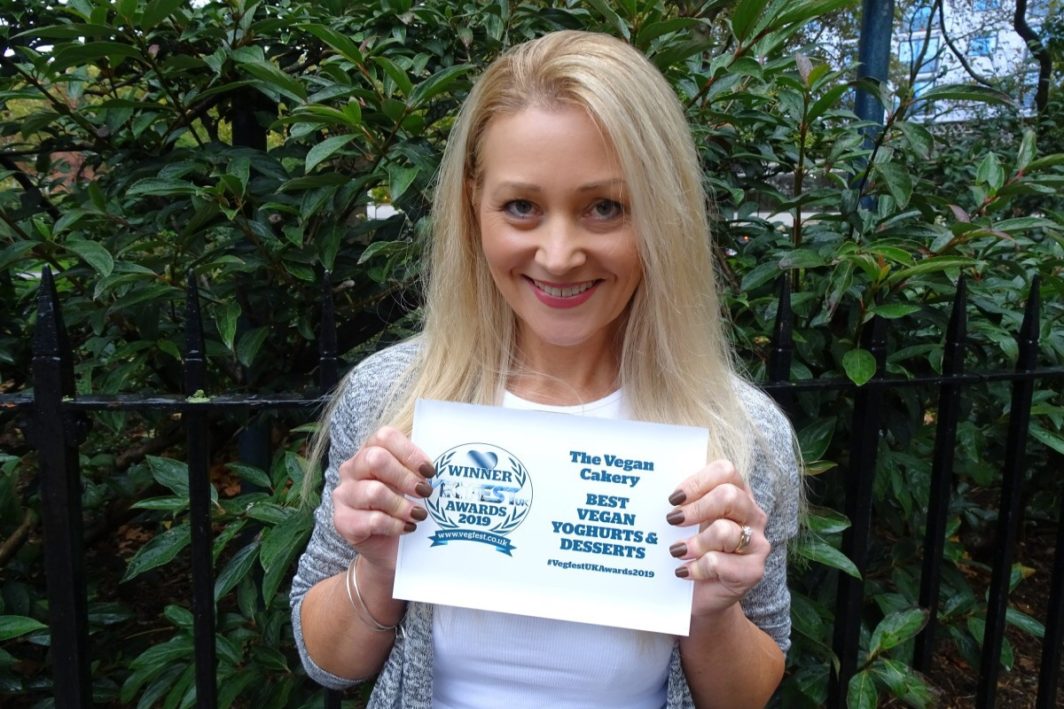 Multi award-winning vegan baker Michelle Orme made yet more history during the annual Vegfest UK Awards in Central London over the weekend, with her one-woman Leicestershire business The Vegan Cakery scooping its fifth consecutive accolade at the prestigious national ceremony.

Proudly flying the flag for Leicestershire once again, Fleckney-based Michelle was awarded the ‘Best Vegan Desserts’ title for 2019 meaning she has won the cakes and desserts category every year in the biggest vegan awards in the UK since first being nominated in 2015.

Taking place at Olympia London in Kensington on Saturday, 26th October, the ceremony celebrated the very best vegan businesses in the UK and Michelle received her award – voted for by the public during a three week window in late September/early October – from actress Carol Royle.

During the preceding four years, The Vegan Cakery won the ‘Best Vegan Cakes’ category against a variety of vegan baking businesses from across the country. For the 2019 instalment of the awards, though, the category was expanded to include wider vegan desserts and yoghurts as well.

Meaning self-taught vegan baker Michelle was pitched against more companies with international reach and a High Street presence in the UK and abroad, this year’s success is therefore even sweeter than the previous four occasions.

“I am so, so grateful to everyone who voted for me to win Best Vegan Desserts – I honestly didn’t think it would be possible to win again this year”, said an ecstatic Michelle, “It really does mean the world to have received so much support, I genuinely can’t say thank you enough and especially with the category having been even tougher this year.

“Winning five consecutive Vegfest UK Awards is very humbling, to be nominated each year is always a great feeling and knowing the voting process is fair too – with all votes validated before being accepted – means the accolade is even more special.”

She added: “The Vegan Cakery is exactly as it was when I started the business back in 2012, just me making everything by hand myself from my own recipes – and that’s how it will always stay. It’s very important to me TVC has kept its uniqueness in that way. When you buy from The Vegan Cakery you know every product is made by me, with the exact same care and attention taken with every bake.”

Having been vegan for more than 15 years, Michelle’s ethics around animal welfare were the driving force behind her starting The Vegan Cakery from her home kitchen in June 2012. With a two-fold desire to provide the ultimate vegan products and also donate money to a variety of animal charities and sanctuaries, the business quickly established a very strong profile.

Winning her first award in 2013, including her five Vegfest UK accolades Michelle now has a total of eight national awards to her name. Alongside her many successes, she has built a fantastic following through The Vegan Cakery online with well over 100,000 followers on social media across the main three platforms, Facebook, Twitter and Instagram.

Creating all of her own recipes from scratch, Michelle’s focus from day one has been to provide the best possible range of 100% vegan products – and especially those most missed by vegan customers on the High Street, such as Bakewell Tarts, Battenbergs, Lemon Meringues, Custard Slices and her signature Mille-Feuille.

In late 2017, she set-up ‘The Vegan Cakery Afternoon Tea’ experience and this has proven to be an exceptionally popular extension of the business. Hiring venues across the UK and providing a ‘high end’ served three-course Afternoon Tea experience, the events regularly sell-out. The next available date is Saturday, 9th November, at The Old Grammar School in Market Harborough.

Next year, Michelle will take on a fresh challenge alongside her already huge workload after being named the judge of the new vegan category at the Scottish Baking Awards in September 2020, which will take place at Mar Hall Golf and Spa Resort near Glasgow.

Entries are open for home bakers and professionals alike from right across the UK, the awards are not exclusively for Scottish bakers, so to find out more and enter the vegan category – which features six classes which can all be entered – please visit  http://www.scottishbakingawards.co.uk/#