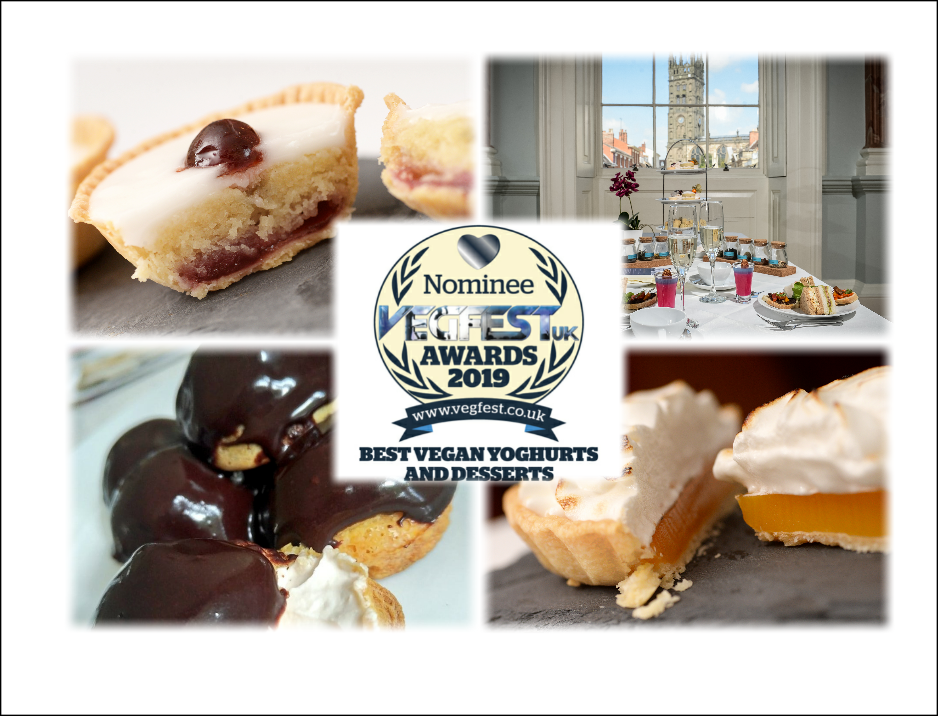 For the past four years consecutively, Michelle’s home-based one-woman business The Vegan Cakery has won the ‘Best Vegan Cakes’ accolade at the prestigious annual awards ceremony at Olympia London in West Kensington.

With the 2019 nominations officially announced this morning, Monday, 23rd September, The Vegan Cakery will not only be battling it out with other independent vegan businesses but also against some large global brands from the dessert and yoghurt sectors.

Voting for the Vegfest UK Awards 2019 is open now and will close at 6pm on Sunday, 13th October. To vote for The Vegan Cakery in the ‘Best Vegan Yoghurts & Desserts’ category, please visit the following link: www.london.vegfest.co.uk/awards/vote

Based in the rural Leicestershire village of Fleckney, Michelle created The Vegan Cakery in 2012 and has since been a pioneer of vegan baking in the UK, first bringing to market cruelty-free versions of products which were otherwise unheard of in the vegan world – such as her signature Mille-Feuille, Bakewell Tarts, Battenbergs and Lemon Meringues, for example.

Most importantly for Michelle, who has been vegan for over 15 years, as well as her ethics and way of life which form the basis for everything she does through The Vegan Cakery, her driving force is two-fold – delivering the highest quality handmade 100% vegan products, which are every bit a match for those containing animal products, and also working to raise funds for animal charities.

“I’m honoured to have been nominated once again for the Vegfest UK Awards, and I’d obviously like to thank the organisers for putting The Vegan Cakery forward for a fifth consecutive year into the awards”, said an elated Michelle, “To have won the Best Vegan Cakes category for each of the past four years was very unexpected, especially as a one-woman business, but very exciting too!

“Since I started The Vegan Cakery I’ve strived to create the ultimate vegan products, no compromise on quality, and it’s been made possible by the incredible customers which have been so supportive of me for the past seven years-plus. The business today is exactly as it was when I started, I make everything myself by hand from my own recipes, and that’s what makes the ‘Cakery so unique.”

She added: “With the change in category this year, bringing together cakes and wider desserts and so introducing some big ‘High Street’ brands, to win a fifth straight award looks very unlikely! Hopefully, though, my customers and those who appreciate what I’ve done since 2012 as a small 100% vegan business, with a strong charity focus, will help me get a few votes – fingers crossed!”

In addition to the four successive national Vegfest UK accolades which The Vegan Cakery has achieved since 2015, the business has also won further titles in the UK Vegan Awards and Vegan Awards UK.

As well as being the sole baker, and with all The Vegan Cakery recipes being Michelle’s own, she looks after every aspect of the business from packaging to marketing, purchasing to enquiries, invoicing to customer liaison.

In addition to the business’ renowned online portal www.vegancakery.com which features over 200 baked-to-order handmade products, The Vegan Cakery also supplies to trade – including its longest standing stockist, Café Mbriki in Leicester city centre – and attends vegan fairs, festivals and vegan markets across the country.

In late 2017, Michelle added a new aspect to The Vegan Cakery’s offering when she established ‘The Vegan Cakery Afternoon Tea’. Hiring venues across the UK, including wonderful historic locations such as the regency ballroom at The Court House in Warwick and the Sir Christopher Wren designed St Mary-At-Hill Church in the City of London, the Afternoon Teas have become hugely popular.

Served over three courses, the ‘high-end’ experiences are intended to provide the ultimate vegan Afternoon Tea and start with an amuse-bouche, wide selection of loose leaf teas, then sandwiches, scones and, of course, fine patisserie. The next event in Leicestershire will be at the beautiful Old Grammar School in Market Harborough on Sunday, 9th November.

To vote for The Vegan Cakery in the Vegfest UK Awards, please visit www.london.vegfest.co.uk/awards/vote and scroll to the ‘Best Vegan Yoghurts & Desserts’ category. Winners will be revealed at a special ceremony at this year’s Vegfest UK event, at Olympia London, on Saturday, 26th October.