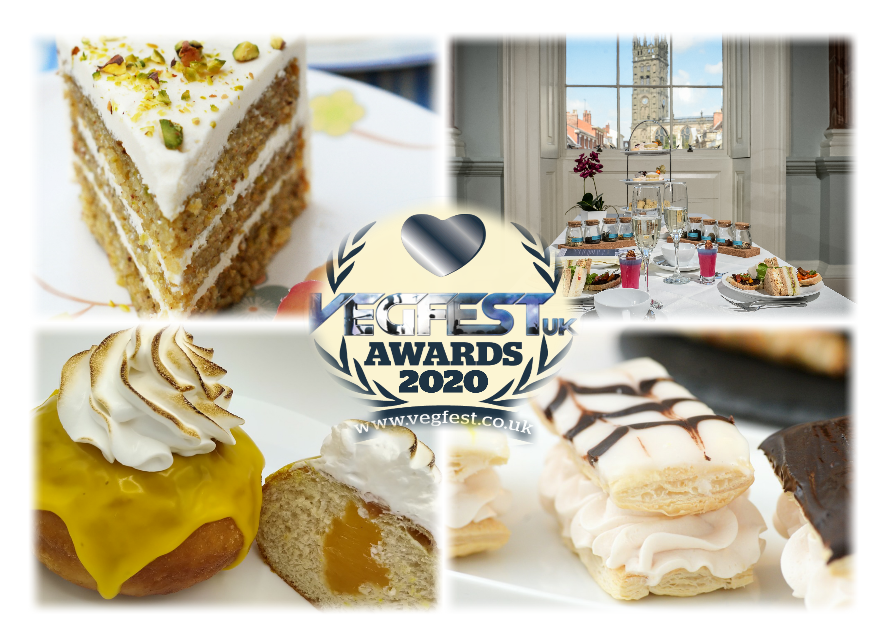 Successful Leicestershire vegan baker Michelle Orme has, for the sixth successive year, been nominated in the ‘Best Vegan Cakes’ category at the national Vegfest UK Awards – and she’s hoping her many customers across the county will lend their support with online voting now open!

Aiming to make it an unprecedented six back-to-back wins in the annual awards, Fleckney-based Michelle is absolutely delighted to have been nominated once again and especially after a year like no other due to the impact of the COVID-19 pandemic.

With all of The Vegan Cakery’s regular Afternoon Tea events needing to be cancelled since March, and with vegan fairs, festivals and markets also badly affected, the impact to the business has most certainly been significant.

Diversifying her business model accordingly to expand The Vegan Cakery’s popular local ‘hand delivery’ days to cover a much wider area – from London in the south to York further north and Norwich in the east to Anglesey in the west – the move has proven to be a massive success.

Of course, as a result of the COVID-19 restrictions which are still in place nationally the annual Vegfest UK Awards ceremony in London won’t be able to take place and so winners will, instead, be announced online on Saturday, 12th December.

Voting is open NOW and will close on Sunday, 6th December. To vote for The Vegan Cakery in the ‘Best Vegan Cakes’ category, visit the following link: www.vegfest.co.uk/vote/

“I didn’t expect the awards to take place this year, so it’s a nice surprise to learn they are being held and I’ve been nominated in ‘Best Vegan Cakes’ for the sixth straight year”, said Michelle, “I’m always overwhelmed with how much support I receive from incredible customers right across the UK, and some overseas as well, and it would mean the absolute world to win for a sixth successive year.

“The Vegan Cakery hasn’t changed since day one in the way everything runs and operates, I’m still the sole baker and I handle all aspects of the business. It’s incredibly hard work, extremely long hours with hardly ever a day off, but so rewarding when I know how much happiness I’m bringing to customers and to also know I can help to support some vital animal charities too.”

Michelle, who has been vegan for over 16 years, established The Vegan Cakery in June 2012 and instantly became a true pioneer. Products which, until that point, had been unheard of in the vegan world – such as vegan ‘cream’ cakes, including her signature Mille-Feuille, Bakewell Tarts and Lemon Meringues – very quickly elevated The Vegan Cakery’s profile across the UK and beyond.

Choosing to follow a vegan lifestyle on animal welfare grounds, having previously been a vegetarian since her teenage years, Michelle originally set-up The Vegan Cakery to try and raise as much money as possible for animal charities both here and abroad and continues to support a variety of causes. In providing nationwide courier deliveries from day one, that also set The Vegan Cakery apart.

“Right from day one I wanted to bring the highest quality vegan cakes and pastries to the widest possible audience, helping to try and make vegan mainstream – which it undoubtedly is today”, she added, “I’ve always prided myself on creating all of my own recipes from scratch, and I think that’s one of the things which really does help The Vegan Cakery stand-out.

“Everything is made fresh to order for each customer, by hand by me, and with well over 200 products to choose from there really is something for everyone. I’m so thankful for the incredible support once again this year, especially with the difficulties presented by COVID-19. If anyone would like to vote for The Vegan Cakery in the Vegfest UK Awards, I really would be so incredibly grateful.”

Added to the five successive Vegfest UK accolades achieved by Michelle over the last five years, The Vegan Cakery has also won further titles in the UK Vegan Awards and Vegan Awards UK.

To vote for The Vegan Cakery in this year’s Vegfest UK Awards, please visit www.vegfest.co.uk/vote and scroll to the ‘Best Vegan Cakes’ category. Voting closes on Sunday, 6th December.