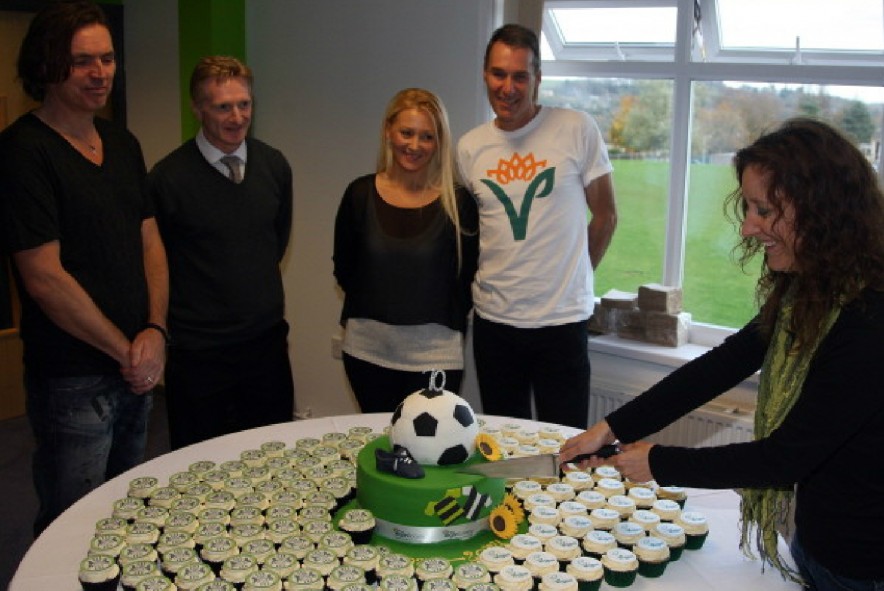 World Vegan Day on Saturday, 1st November, was an especially notable date for Fleckney baker Michelle Orme who was commissioned by The Vegan Society to produce a unique celebration cake and 150 bespoke cupcakes for the organisation’s 70th anniversary.

Michelle, who runs not-for-profit business The Vegan Cakery from her home in the village, is a Vegan Society trademark holder and was understandably thrilled to have been asked to bake for the landmark occasion – clear recognition of the quality of her products. The event was celebrated at the home ground of Forest Green Rovers football club near Stroud, Gloucestershire.

Establishing The Vegan Cakery over two years ago to help support a variety of animal charities and animal sanctuaries through cash and product donations, in-keeping with her benevolent ways Michelle donated the main 70th anniversary centrepiece cake and cupcakes to The Vegan Society.

In support of the event, Dale Vince – Chairman of Forest Green Rovers and owner of ethical energy company Ecotricity – helped to arrange the world’s first ever ‘vegan football match’ on World Vegan Day which ended as an exciting 3-3 draw between Forest Green and Lincoln City.

As a vegan himself, Vince has already changed the menus at Forest Green to vegetarian and on World Vegan Day the club went a step further by going fully vegan – all food on sale contained no animal products or derivatives.

“It’s been such an honour to have been asked by The Vegan Society to bake for such a special and important occasion, a lot of hard work and long hours went into making the cake and the cupcakes but it was all worth it”, said Michelle, “I’m passionate about veganism and animal welfare, so being part of The Vegan Society’s 70th anniversary was a real privilege.”